Viewers Of The Foremost Reality Show (Bbnaija) In Nigeria Have Reacted To A Video Of Pere Displaying His Sexual Prowess On Jackie B In A Funny Way.

The video captured the moment Pere, who is the current head of house (referred to as a dictator due to his rigid and authoritative regime ever since he assumed the position) lifted Jackie B up with her legs wide open and went further to lay her on the bed.

After positioning Jackie B in the best way, he began the in-out movement, although it wasn’t a real one. 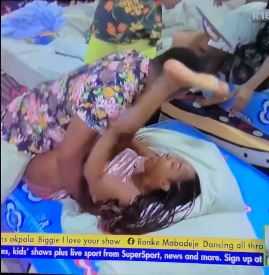 This scene however triggered brouhahas on the social media space.

Watch the video below: